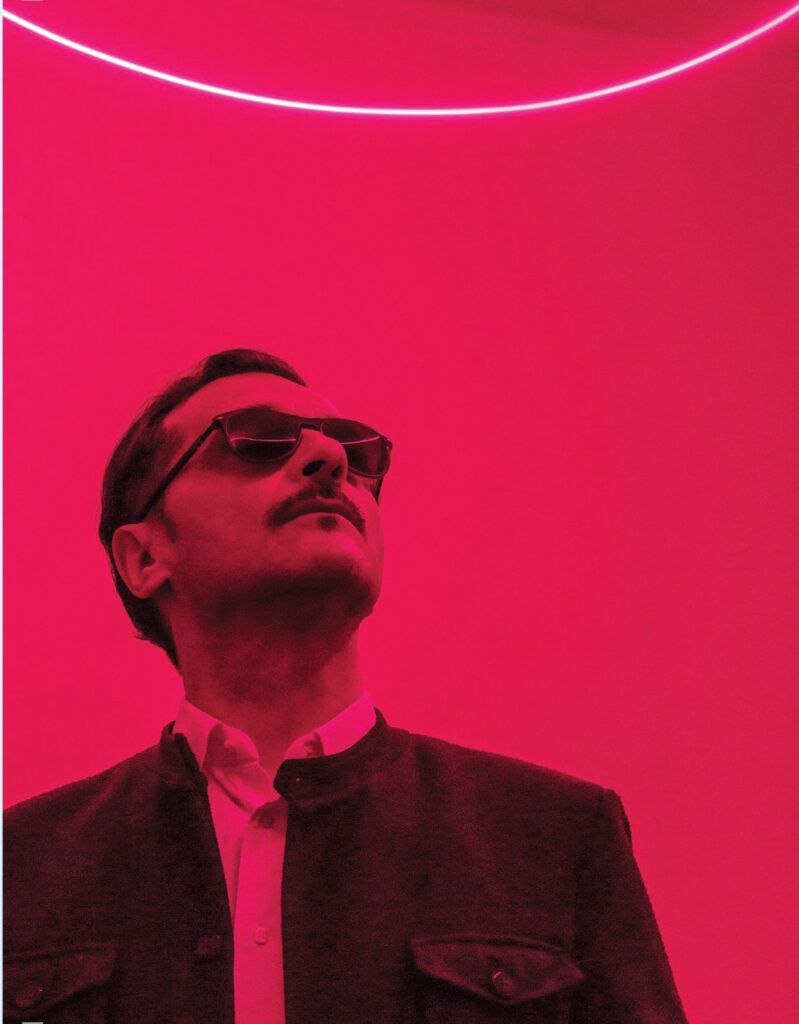 The art of knowing to put on a show

The island-port where the centre finds its edge

To get to the Marghera studio of curator, art critic and writer Luca Massimo Barbero, you have to take the flyover separating the historic centre of Venice from her commercial and industrial port. It’s an urban landscape dominated by wharves where vast container ships with evocative names nudge their way in and out as they take on and land their cargoes.

The address at Banchina d’Azoto (Nitrogen Quay) is significant, situated as it is right bang in the middle of an area of huge regeneration. Erected in 1938, the Azoto building today houses the customs offices but its generously proportioned and adaptable spaces are mainly occupied by artists, architects, designers and other creatives attracted by its concrete structure with 20-feet-high ceilings and a classic grid pattern of pilasters, beams and trusses. Luca Massimo Barbero’s studio is on the top floor of the building where the spaces are versatile, accommodating and where the abundance of air and light and the view out over the constantly moving docks are integral to the whole. The space has a strong personality, evidenced in the materiality of the raw concrete walls, as if work, life and study were all layered together giving a present-day ‘factory’ effect.

Barbero opted for Marghera more than twenty years ago, confident of its potential and its contemporary appeal, and while the place could certainly benefit from better transport links with Venice, he was convinced that the presence of creativity, art and design could be a catalyst for a regeneration that is already in part underway. Barbero describes Marghera as “complementing Venice’s historical centre, which no longer responds to the needs of young people, either in terms of cost, space, or logistics, and this is especially the case for young artists or anybody looking to start an activity that isn’t in some way connected to the prevailing monopoly of the tourism sector”.

Here, Barbero has found a more congenial dimension, at once contemporary, dynamic and intense, reflecting the way he works. We find him immersed in preparing the second of three exhibitions on the work of Lucio Fontana, for Hauser&Wirth of New York. After his successful curatorship of “Spatial Environments” in Los Angeles, he’s now concentrating on the sculptural works produced by the master of Spatialism. Recognized as the foremost scholar of Lucio Fontana, Barbero will be presenting the artist’s work in a new, intense and visionary light, highlighting those aspects of his oeuvre that were innovative and less well-known.

Meanwhile, his exhibition “Painting is back. Anni Ottanta, la pittura in Italia” is still showing at the Gallerie d’Italia in Milan. It’s a fascinating show that offers younger artists especially the opportunity to learn about an extraordinary moment in Italian art and culture. To be able to see afresh and for the first time the richness and vitality of those years aids our understanding of the works’ novel character and the reason for the huge international success of the painters of that period. Barbero’s hallmarks as a curator have always been his scholarly approach and his visionary skill, qualities that are apparent in every single one of his shows, where the story he recounts through the works and the works themselves combine to establish an immediate rapport with the visitor. His uniqueness lies in his capacity to move people emotionally, to pique their curiosity and to create a narrative complexity that appeals to as wide a public as possible, from young people to other artists, and his visitor numbers are proof of the success of his approach.

Mindful that exhibition opportunities are collective endeavours, Barbero has come up with an original initiative for getting the work of young contemporary artists out of institutions and into the gaze of the public in Italy as well as further afield in Europe. Called ‘Venice Time Case’, artists’ works will be transported in special suitcases as part of a travelling project. “It works a bit like Instagram and has its own website: @venicetimecase. It’ll be virtual at first, then from September there’ll be a series of shows in Milan, Paris, Berlin and Rome. The idea is to help young artists working in Venice, Marghera and Mestre – an area that has so much to offer in terms of artistic talent but is too slow to recognize the creative dynamism in its contemporary artists – to emerge and get international visibility.

Luca Massimo Barbero, curator, writer and art critic, is Director of the Institute of Art History at the Fondazione Giorgio Cini. He has been Associate Curator at the Peggy Guggenheim Collection in Venice for the last twenty years and is currently Associate Curator of the Modern and Contemporary Art Collections of the Intesa Sanpaolo. He has curated exhibitions and published on 20th-century artists for major museums of contemporary art, both in Italy and internationally.